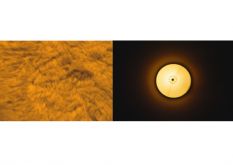 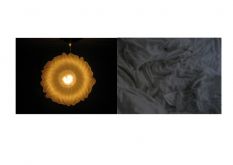 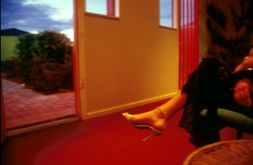 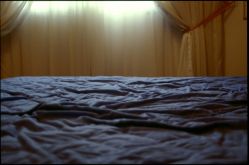 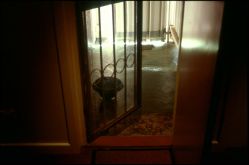 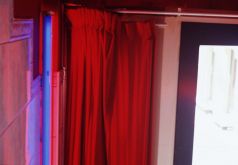 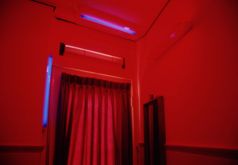 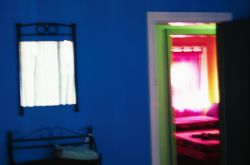 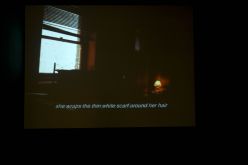 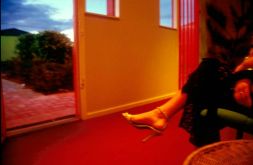 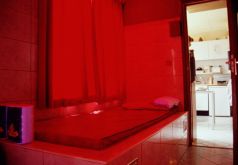 An Essay by Professor Richard Read

Helen Smith’s bordello photographs explore the illusions that art, prostitution and indeed religion use to trigger the fantasies that make their institutions viable. You could see them as a metaphor of the mystery that all portraiture depends on. Imagine a Dutch interior by Vermeer from which a woman gazes out at the spectator (below, bottom right).  She only has eyes for us, it seems, but what does she see? For her we are a stream of promiscuous voyeurs, sweeping past her in the gallery, pausing only for a moment, changing our fashions over the centuries, few of us ever caring to possess her, and then only for a while, for images often outlive their viewers.1

Smith’s boudoirs contain no figures, though one of them shows an ankle ('Stella's Red House #1', below, bottom left). It reminds us that Victorian decorators sometimes sheathed even table legs with cloth to preserve decorum and guard them from erotic suggestions (which thereby they arouse). In brothels as far apart as Amsterdam, Sydney and Kalgoorlie, Smith has captured the sensuous decor and visionary light that serve as identical metaphors of the Ultimate Interior that customers pay to enter. The dark sun of a light bulb shining from a tired lampshade is juxtaposed with the shuttered glissade of a moulded glass wall ('Golden Apple #3 + Maggies #7', below). Many could be views from beds where the loveless action happens, but the diptych form of the print endows them with a religious aura and underlines their role as glossy artefacts on aluminium panels. 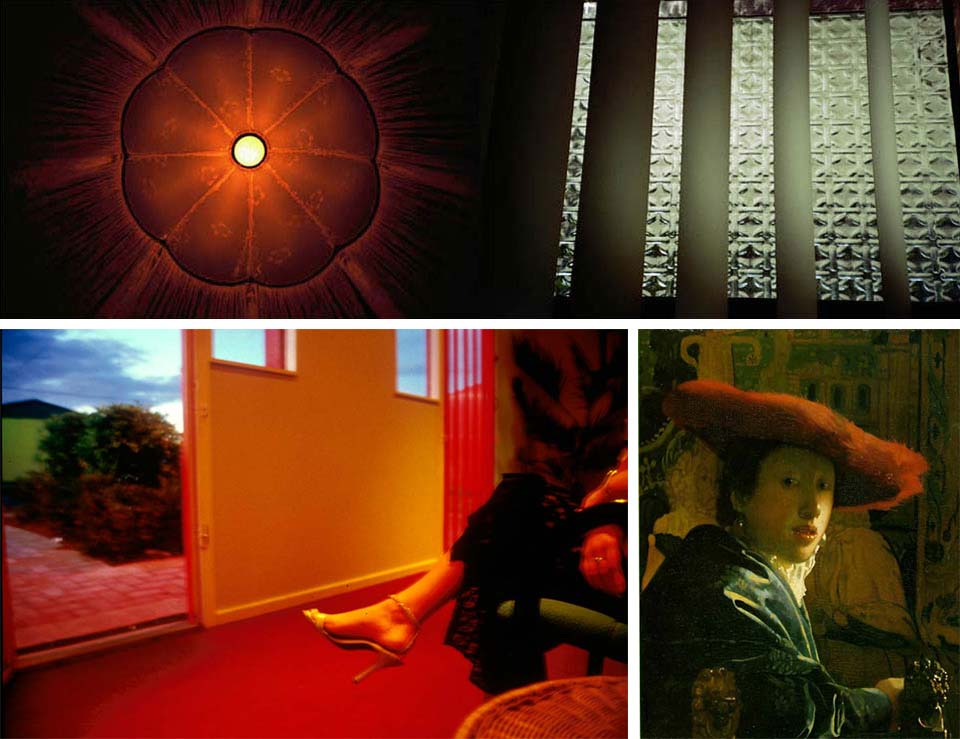 Brothels offer an extreme instance of the general law that all buildings divide into back rooms and front rooms for various kinds of social performances.2 Habit blinds us to the strange convention that photography inherits from painting that requires imaginary walls to be torn down for gallery viewers to see into the image interiors. The shock value of Manet’s and Picasso’s brothel scenes depends entirely on this unexpected fusion of forbidden and respectable places (below, left and right respectively). The respectable gallery space gives us direct access to the disreputable brothel. The brothel bourdoir itself encourages a category error. Having gained the reception area from the street outside, the customer regards the bedroom as the final recess of the premises, but it’s really only a front room masquerading as a back room. The real back room is where the sex worker retires ‘with other women ... behind the scenes; ... polishing her equipment, but not in battle; … getting her costume together, preparing her make-up, laying out her tactics ... before making her entrance on the stage...’.3 It is also, of course, where the private foibles of the customers are reported and ridiculed by the sex workers and the level of their danger assessed. Due to reluctant permission from brothel managers, Smith’s photographs had to be taken quickly and do not aspire to the perfection of ‘art’ photography, but for this very reason serve more powerfully as metaphors of art itself.

In one scene the light from white goods in a utilitarian kitchen breaks through an open doorway onto the rosy textures of the adjoining boudoir, shattering its seductive ambience with a glimpse of clinical functionalism (above, right). Whence the golden light in the adjoining scene, filtering through tented veils onto the bluish ocean of rumpled sheets ('Questa Casa #1', below left)? It can only come from the mundane light of the ordinary world outside, a distinct zone on which all deviations from normality depend for their glamour. The brothel interior would lose its dangerous allure were it not for the humdrum street outside. The exposure of boundaries is temporal as well as spatial here, for the rumpled sheets record not only erotic turmoil but also an interval of workaday bed making between sexual performances, yet it continues to suggest an ocean in endless motion under a Baroque sky, defeating the moment. ‘All art is a trick’, said Hegel. No wonder that the oldest profession also speaks of ‘turning tricks’. As Iceberg Slim explained, the prostitute’s fundamental trick is getting johns to pay for what others get free.4

In the seventeenth century Caravaggio painted young fops getting rooked in card games (above, right). The duping was also intended as an allegory of art-making itself, or ‘fooling the eye’. The artist made the viewer in the gallery complicit with the fraudsters by showing us the backs of cards hidden from the player being duped. We are ‘in on the act’. But the spectator is also being duped in a different way from the fop. He is fooled by the cardplayers; we are fooled by the illusion5. It is a witty and daring collocation of art and crime that drags the connoisseur off his social plinth into the gutter. Trapping us with her exposures, Smith does something similar for photography, and yet the dangerous glamour she captures, skimmed off and frozen by the lens, is still available to imaginative touch and kinetic sensation, and stays real enough in its drawing power and hold on our fantasy.

1. Georges Didi-Huberman, ‘Before the Image, Before Time: The Sovereignty of Anachronism’, trans. Peter Mason, Compelling Visuality: The Work of Art in and out of History, ed. Claire Farago and Robert Zwijnenberg (Minneapolis and London: University of Minnesota Press, 2003), p. 31.

2. Erving Goffman, The Presentation of Self in Everyday Life (London: Allen Lane, 1959), pp. 92-119. Another obvious example is the contrast of décor between the restaurant where food is served and the kitchen where it is prepared.

4. See the classic Blaxploitation novel Pimp: the Story of My Life (1967) by Iceberg Slim (Robert Beck). Of course the woman is tricked by the pimp, and the pimp by the respectable classes whose wealth and power he will never rival, for all his bling and glad rags.